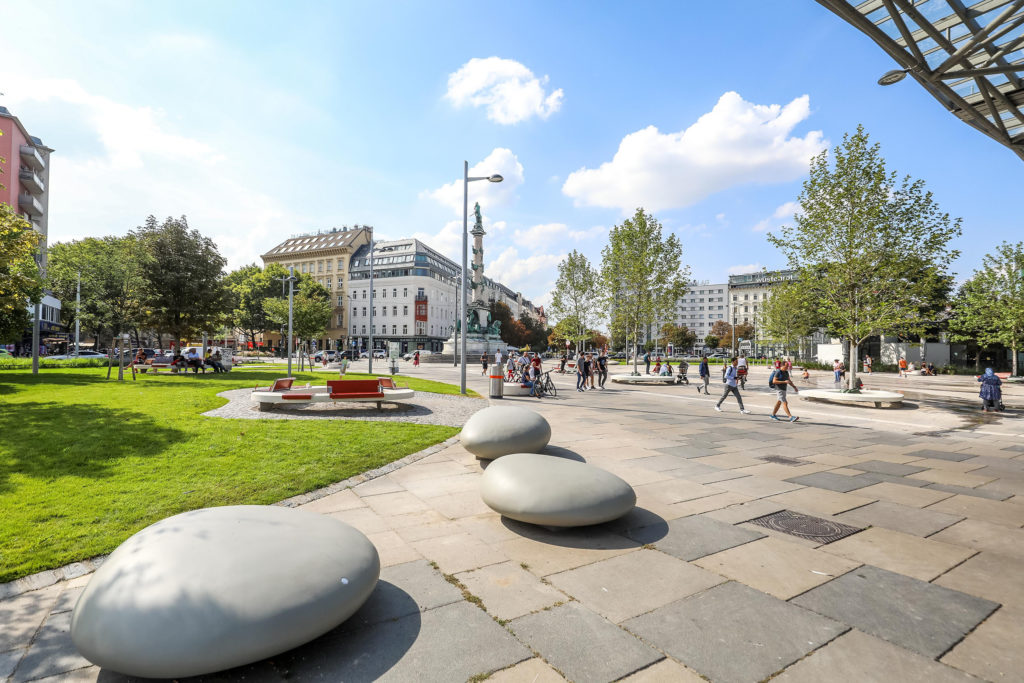 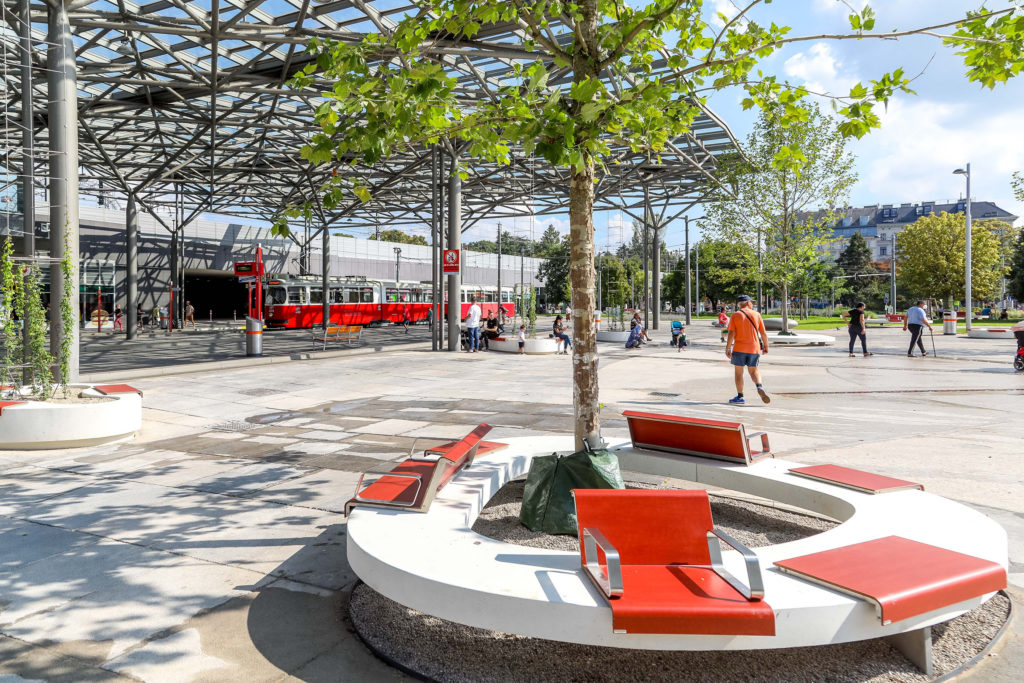 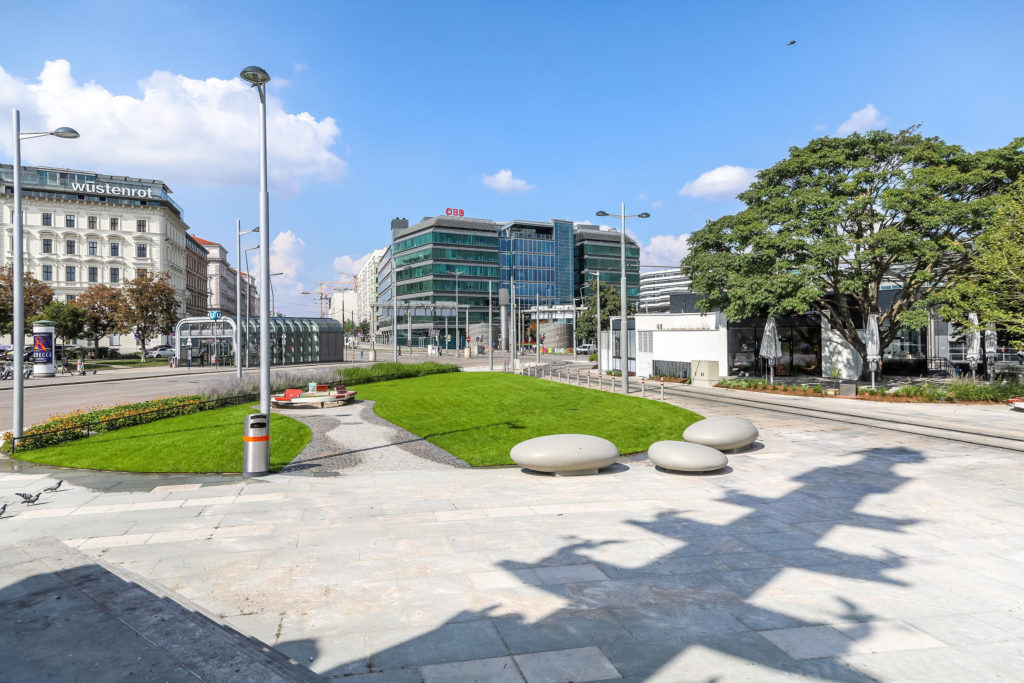 If you’ve every been to Vienna’s 2nd district, you certainly know the Praterstern – it is one of the most important traffic junctions in Vienna. Hundreds of thousands of people cross it every day with their bikes, cars, on foot or via public transport. If you would like to see a nice cross-section of the Viennese population, it is an ideal place for observation. And, it is practically the front yard of the Wurstelprater.

In recent months, the Praterstern has been redesigned and now appears in a new, greener guise. But let’s jump back in time for a second – because since when and why does the Praterstern even exist? If you want to skip the history lesson, just jump two headlines further down.

The construction of the new traffic junction began in 1780. Emperor Joseph II had the Fugbach (a stream crossing the area) filled in and the Prater Bridge as well as the forester’s lodge at the entrance to the Prater demolished. In addition, five new streets were created by 1782. Together with the already existing Hauptallee and Praterstraße, these new streets (nowadays known as Heinestraße, Nordbahnstraße, Lassallestraße, Ausstellungsstraße and Franzensbrückenstraße) formed the 7 rays leading away from the semi-circular square.

One goal of this extensive redesign was to create appropriate access to the two recreation areas Prater and Augarten. And that was a big success – after all, the new semi-circular square had the mighty diameter of about 340 meters. The square likely got its new name at the beginning of the 19th century and was known as Praterstern from then on.

When The Star Became An Egg

The Tegetthoff monument, which still stands prominently on the Praterstern, was unveiled in 1886 (you can find details about the admiral and his monument here).

After the Second World War (you probably can guess it, the Praterstern was not untouched by the war) the square was expanded by a larger roundabout and the former semicircle with a star became something like an egg. In the course of this, the train station, which was previously located outside of the semicircle, was also moved into the middle of the roundabout.

Since 1962, the suburban rail (S-Bahn) stops at Praterstern. In 1981 it was joined by the underground line U1, and in 2008 by the underground line U2. The extension by the U2 was also taken as an opportunity to modernize the station as a whole. In 2009, an interesting pergola construction was erected in front of the station, which was dismantled again in 2020 after various criticisms. 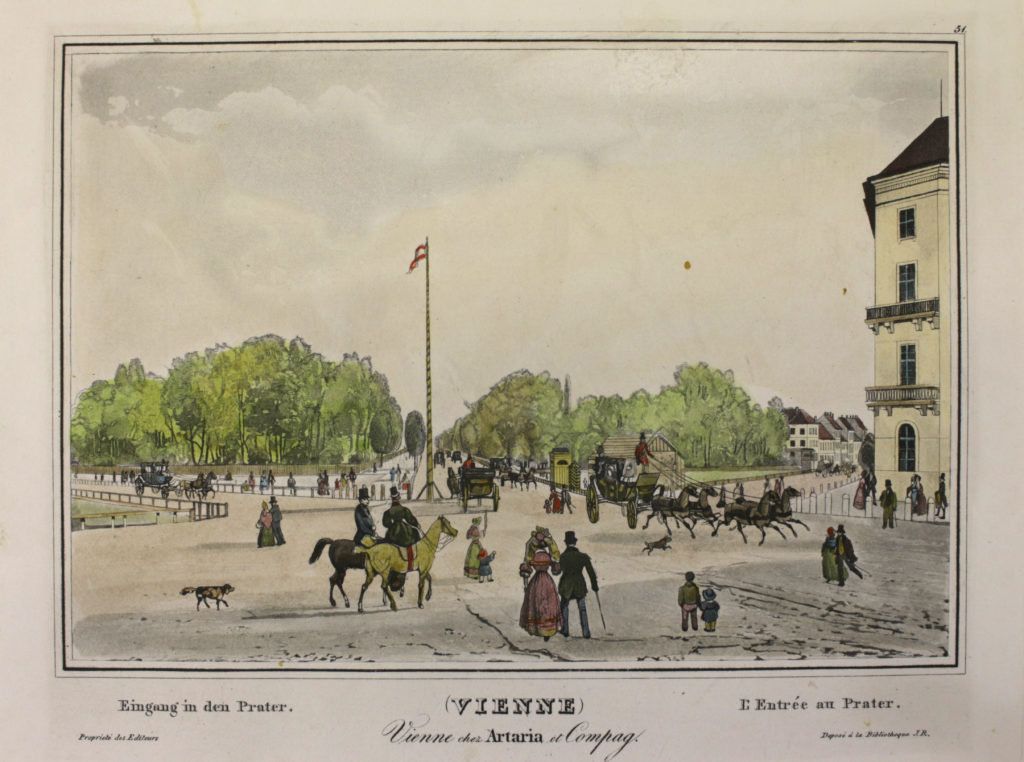 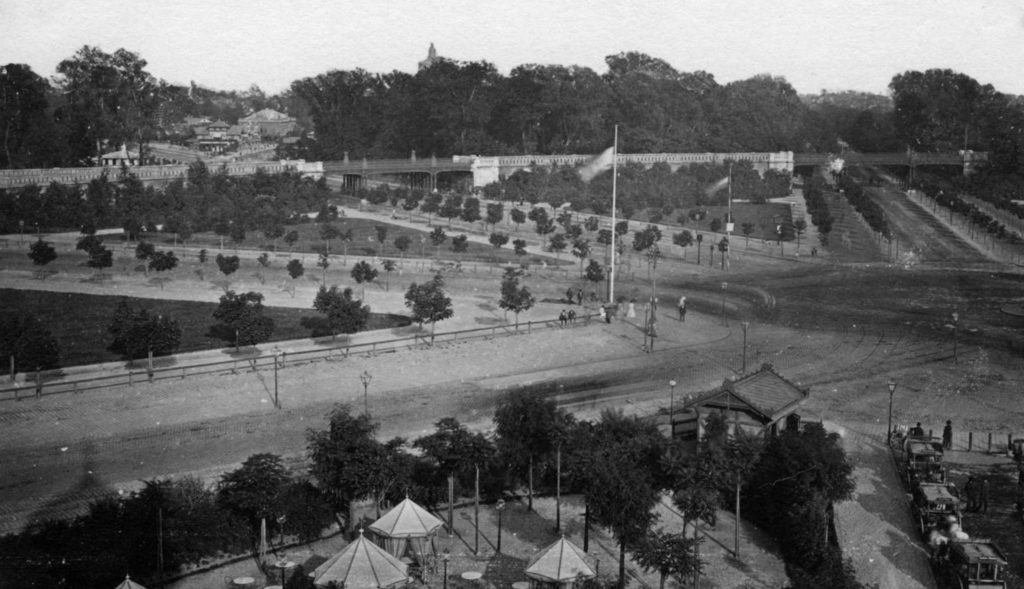 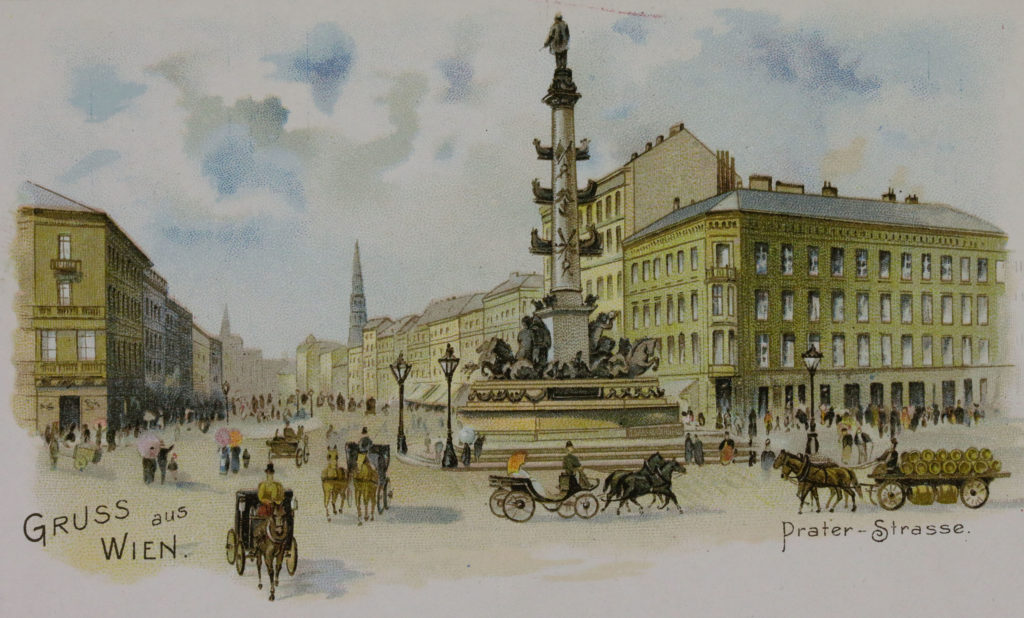 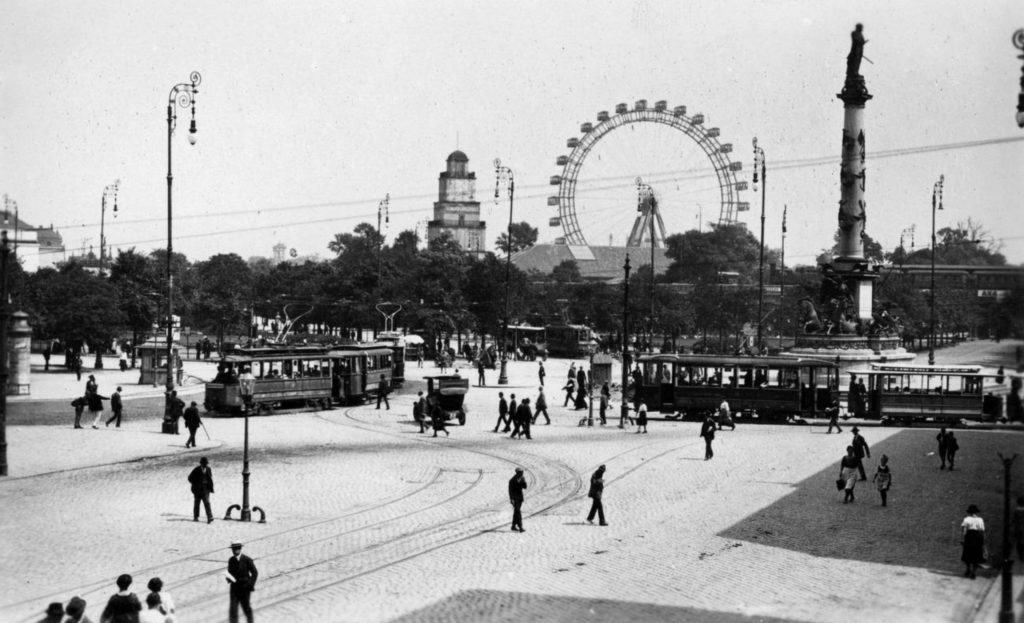 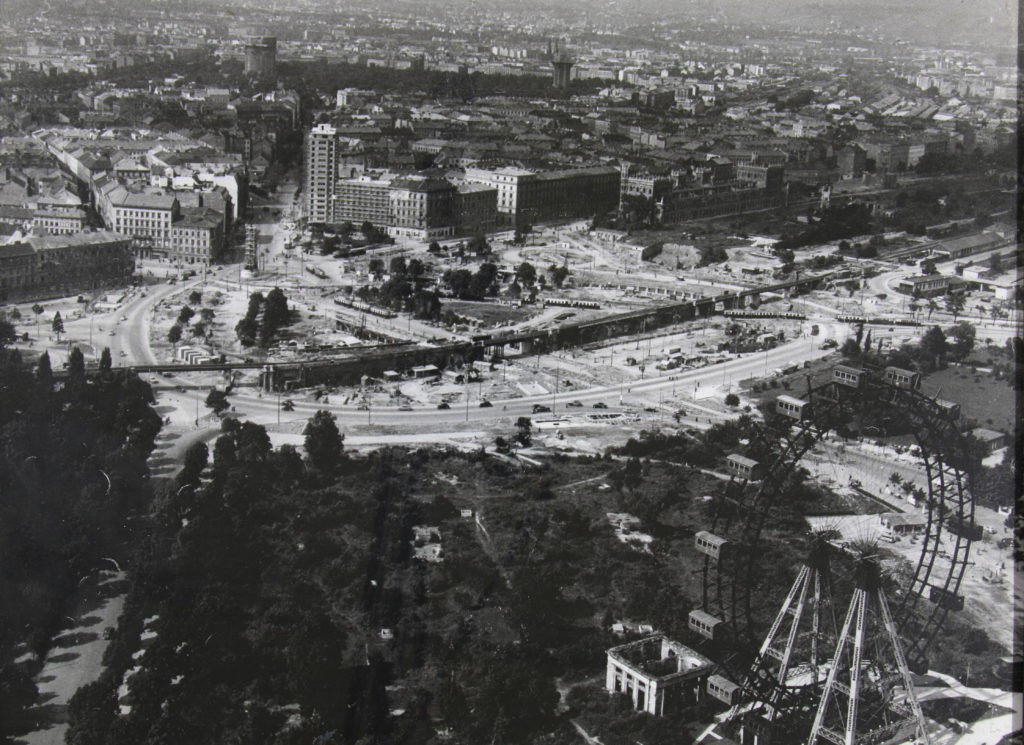 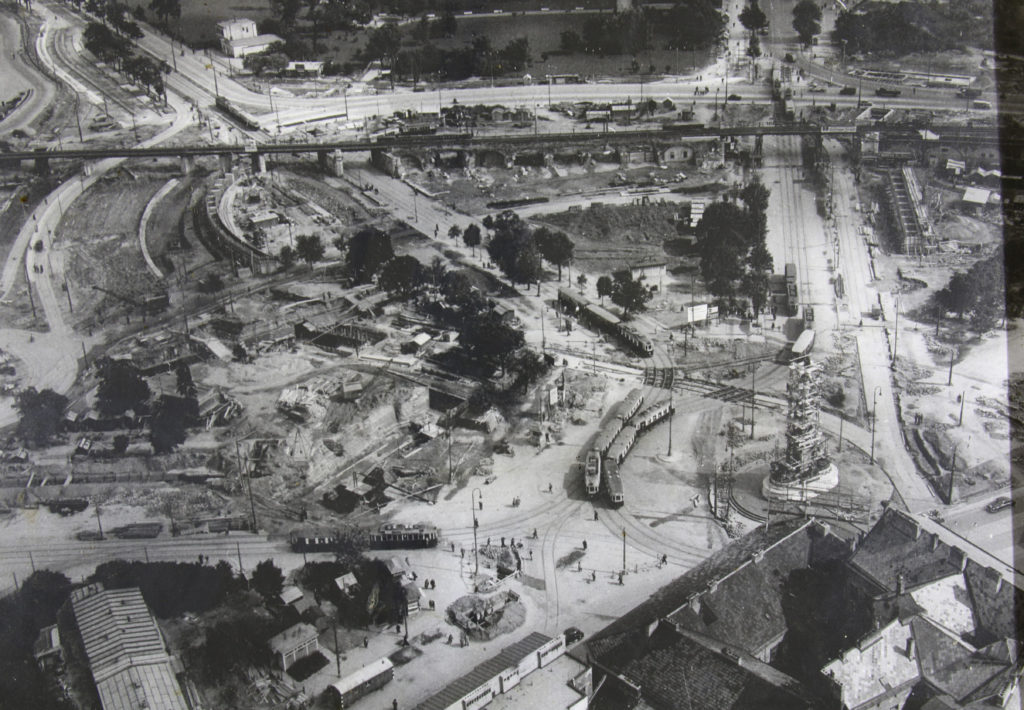 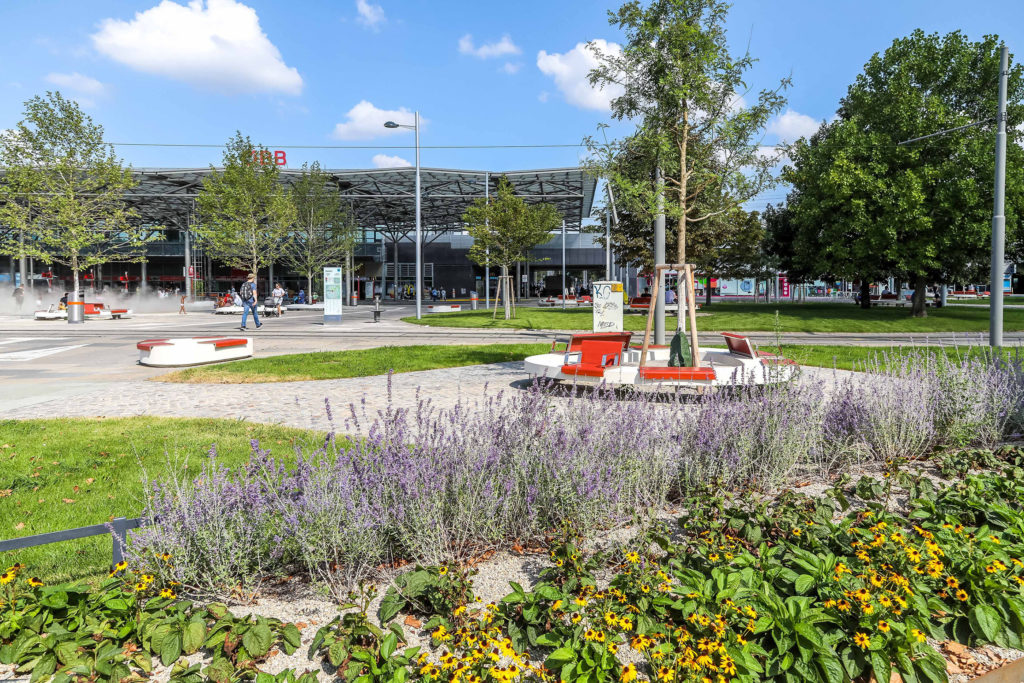 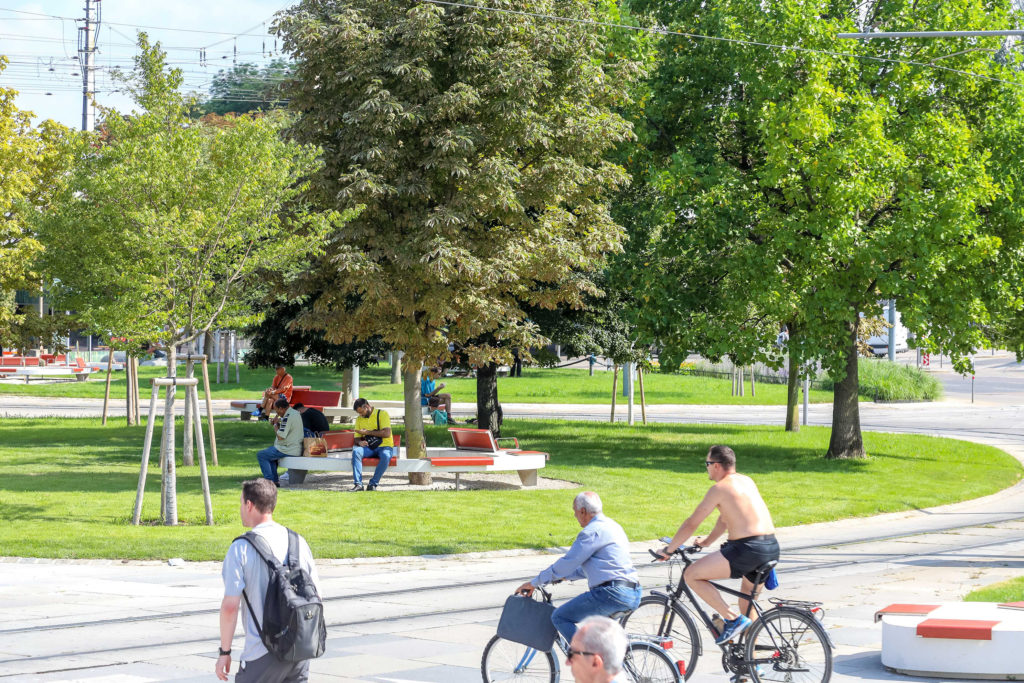 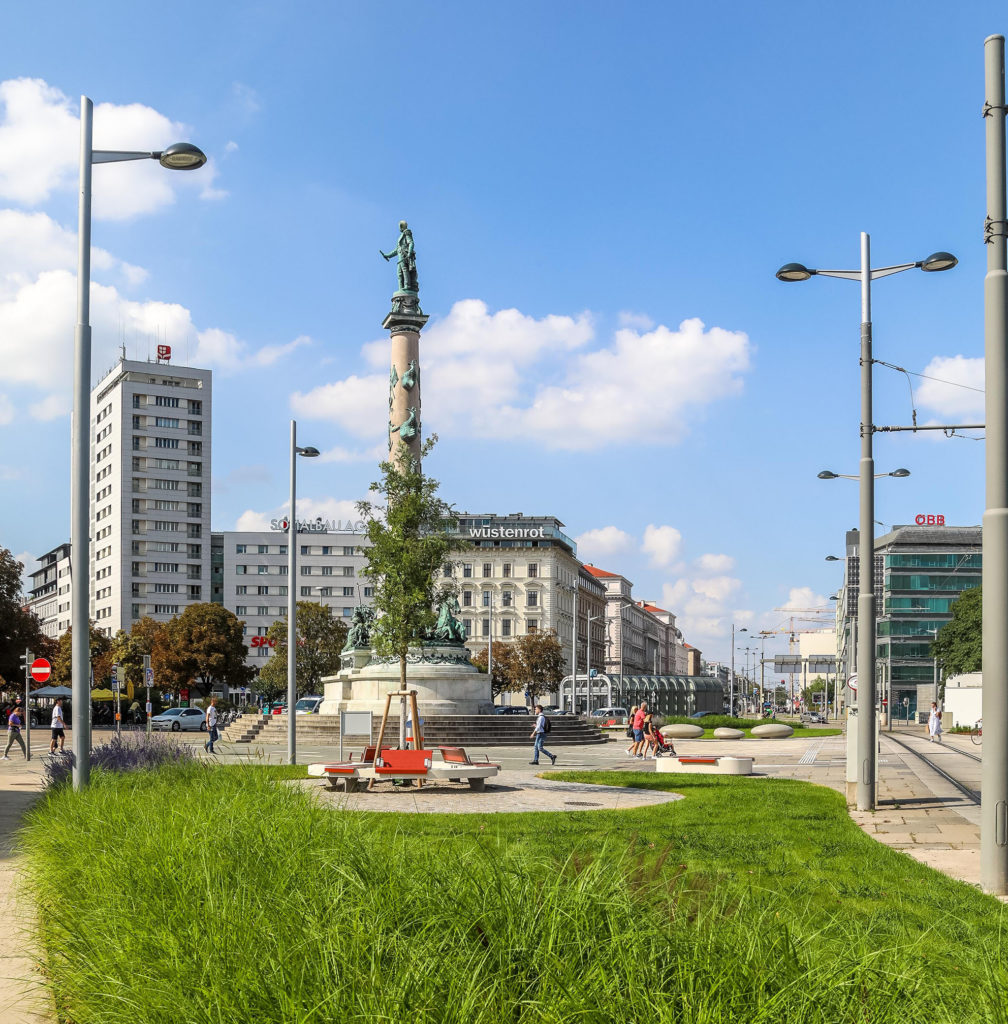 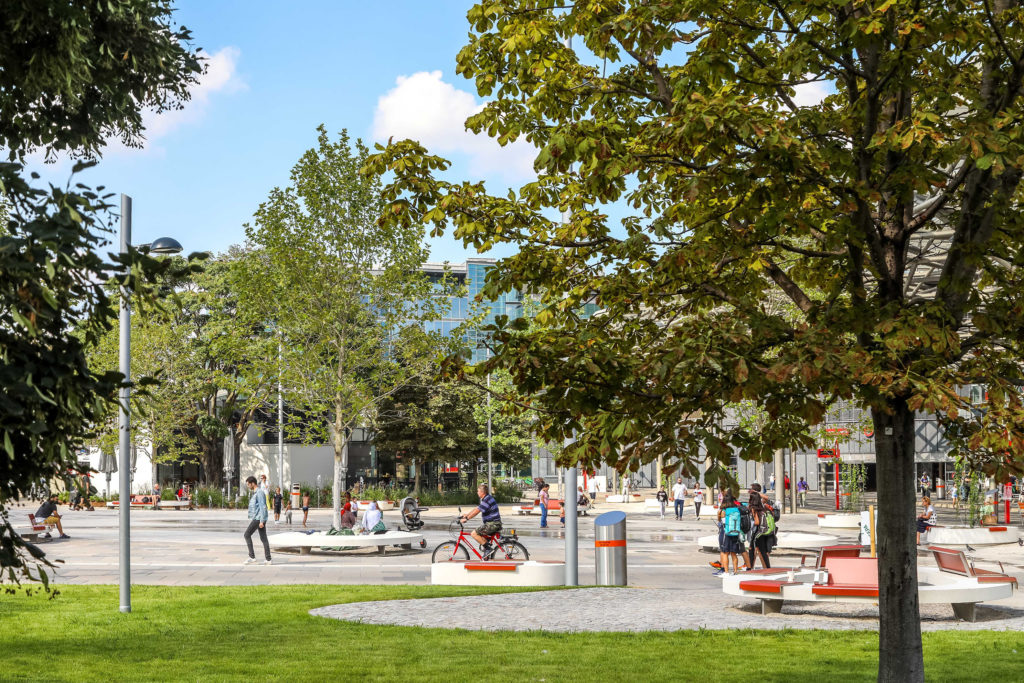 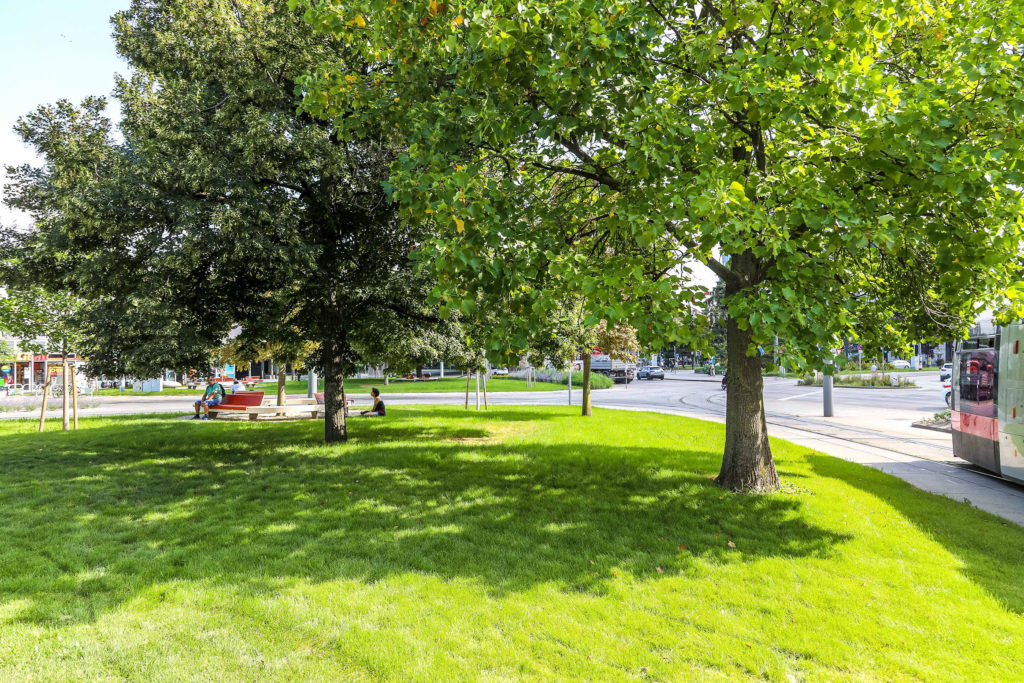 And now? Now everything is a bit different again! The new Praterstern was opened at the end of August 2022. The aim of the redesign was to significantly expand the green areas in the middle of the roundabout in order to reduce heat build-up on the square. In addition, the square should be tranformed into a place where people feel comfortable and safe and want to spend a bit more time.

A wide variety of seating options were created throughout the square – in the middle of the hustle and bustle but also on the edge, in the middle of grass and trees. A slightly raised flower bed now runs along the roundabout, in which grass, shrubs and flowers bring new color and freshness to the Praterstern. The green areas were doubled, as was the stock of trees. There are now almost 120 trees on the Praterstern. The bicycle parking spaces also have been renewed and expanded by a third to a total of 340 spaces.

Unlike the redesign in 2009, this time not only the forecourt was beautified. The rear side with a view of the Ferris wheel, which had previously been neglected, was also taken into account in the redesign. So when you leave the train station on your way to the Prater, trees, benches and a bit of grass now greet you here too. 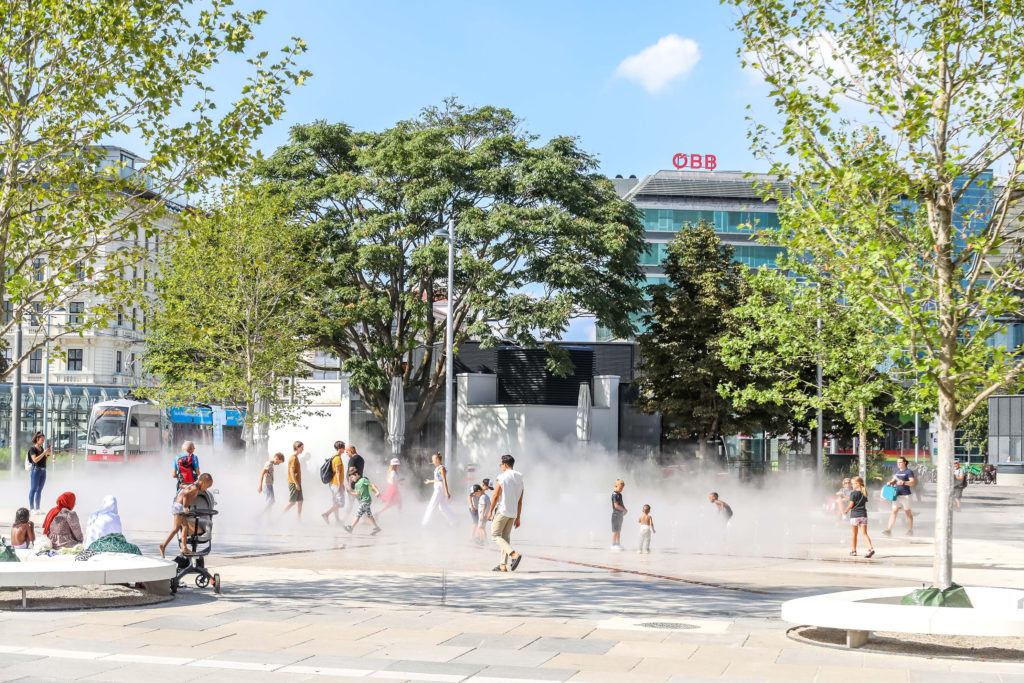 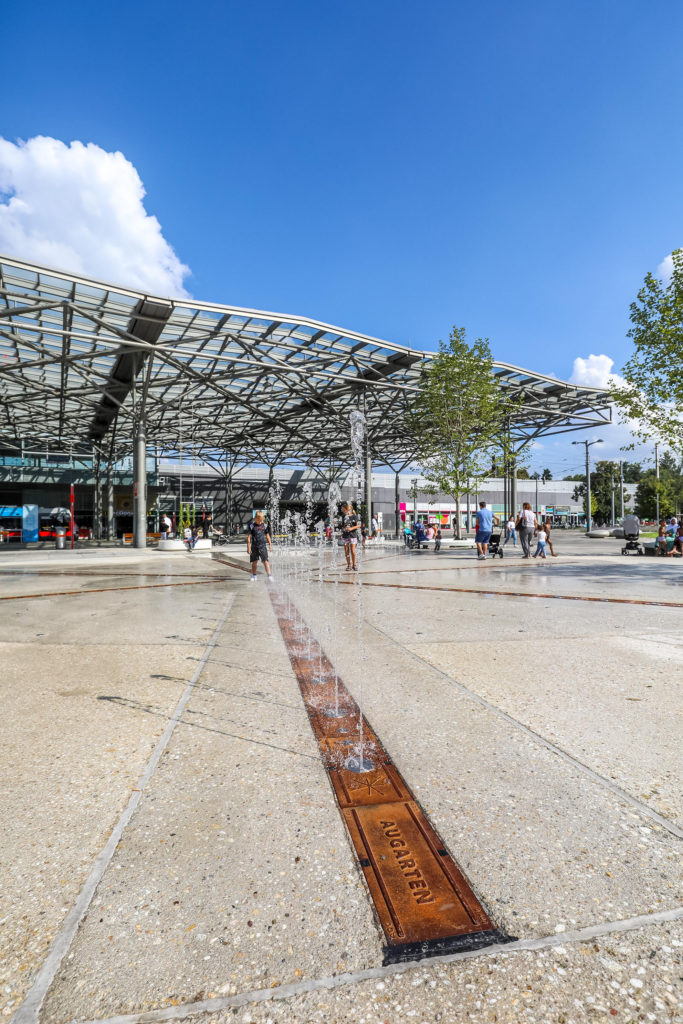 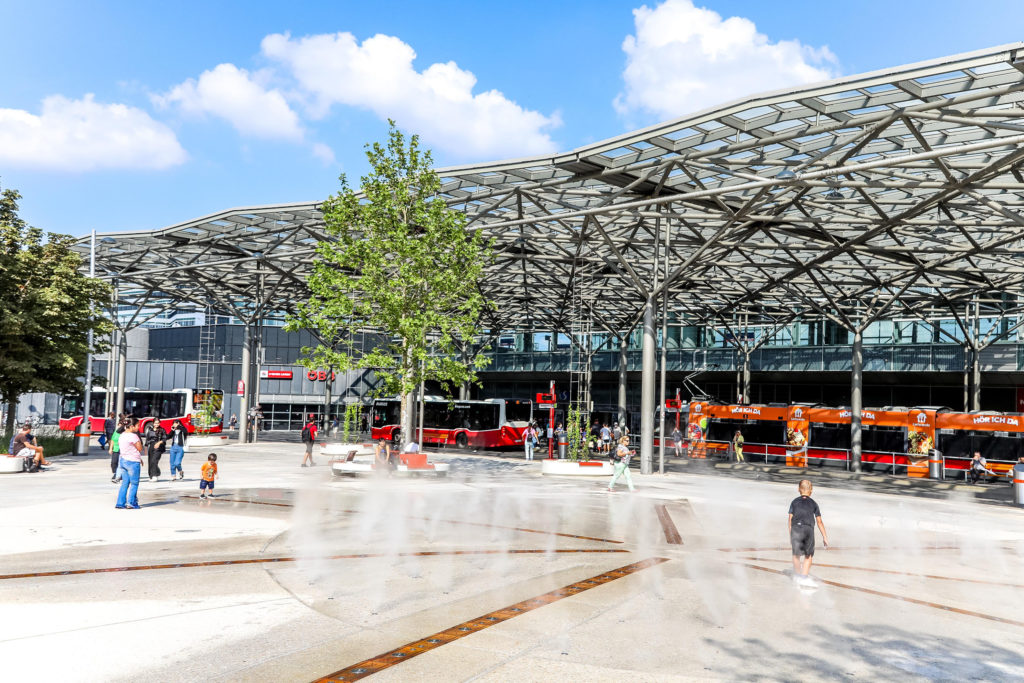 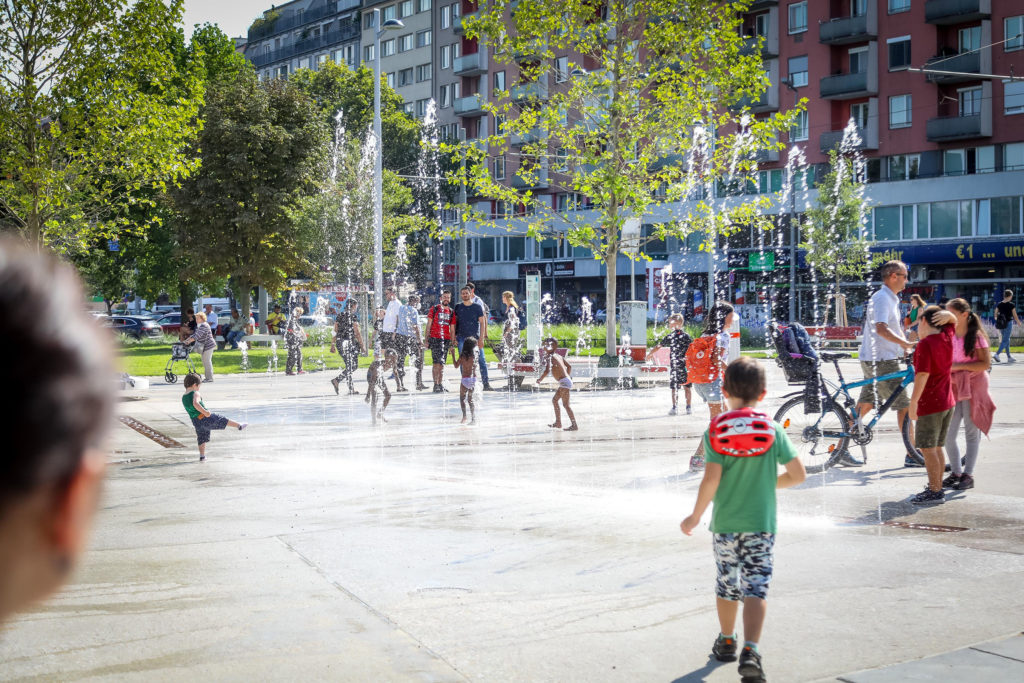 A New Star Made Of Water

As a homage to the original form of the Praterstern, an almost 500 square meter water feature was built. The seven arms of the water feature arranged in a star shape imitate the seven streets that originally gave the Praterstern its name. Each of the arms bears the name of a significant landmark in that direction. And for all fans of numbers: there are more than 330 fog and water jet nozzles in Vienna’s largest water feature.

Depending on the temperature, the season, and time of day, it can be switched from water jets to nebulizers and sprinklers. As you can see in the pictures, the water feature is a real treat, especially for children. If the space is needed for something else or if it is too cool for water games, the element can be easily switched off.

The new, green Praterstern was thought through, developed and implemented by KENH Architects and D\D Landscape Planning.

We hope you enjoy it as much as we do!